John had long specialised in the military and social history of the late Georgian and Regency period, with particular emphasis on the events of the Napoleonic Wars; having what can only be described as a ‘passion’ for Wellington and Waterloo! As Honorary Secretary of ‘The Waterloo Committee’ (a post John held for 20 years, until his retirement in 2012, when he was appointed a Vice President by His Grace The Duke of Wellington) he became an established book reviewer for various publishing houses which, in turn, gave rise to numerous talks and lectures for, amongst others, the V&A, the National Army Museum, and the British Army. Indeed, one of the most memorable occasions was delivering a talk, on Waterloo, to the ‘officers mess’ at a British base high up in the mountains (and the snow) in Bosnia Herzegovina, whilst serving in the Former Yugoslavia in the 1990’s! 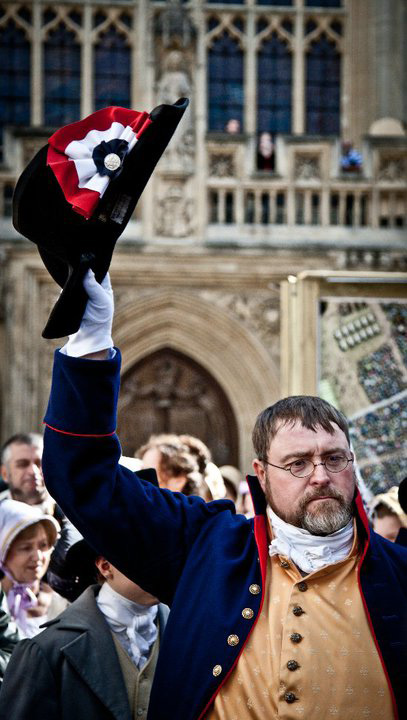 Offers of consultancy work lead to involvement, and often appearances in, a wide variety of Film, TV, and Radio productions;  alongside which, John was establishing himself as ‘Performance Historian’; widening his remit to encompass the Medieval to Edwardian period. In addition, John has, for a number of years, been a visiting lecturer at Birmingham University; endeavouring to instruct the next generation of heritage managers and custodians, of the trials and tribulations of running events at historic properties!

Throughout, however, it is ‘historical interpretation’ that is John’s principal love and now he offers in excess of 20 ‘characters’! It means that his life is a constant round of ‘dressing up’ and travelling – be it in schools, for the wider heritage sector, or for the numerous clubs, societies, organisations, or corporate undertakings, who wish to meet a person from the past!