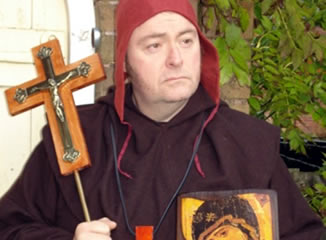 On the Road to Santiago de Compostela: ‘Brother Ignatius’, of the Franciscan Order, is preparing to make his pilgrimage to Santiago de Compostela where the relics of the Apostle, St. James, are much venerated.  Having previously practised as an Apothecary, it is his intention to minister to the physical, as well as the spiritual, needs of his fellow pilgrims. This presentation, which is suitable for both an interior and exterior setting, or as a walking/mobile presentation, deals with Holy and Monastic life and may be adapted to present any particular theme in the time period prior to the Reformation.

A specifically themed presentation is offered, relating to the year 1415, when King Henry V, who was shortly to be engaged against the French at Agincourt, provides for the defence of his Kingdom by issuing a ‘Commission of Array’, requiring the Clergy to take up arms; to defend the realm, the church, and the faith, against the malice of England’s enemies – the French and the Scots!