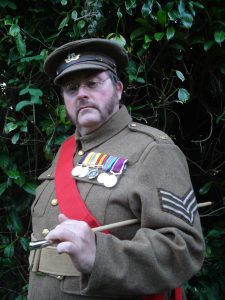 ‘Sgt Frederick White’ of the Royal Warwickshire Regiment, is recruiting for King, Country, and Empire! It is August 1914 and Britain is at war with Germany. Belgium and parts of northern France are already occupied and Lord Kitchener has called for the immediate recruitment of 100,000 men.

‘Sgt White’, a veteran of campaigns in the Sudan and South Africa, has been sent out from the Regimental Depot, in Warwick, in search of recruits, men aged 19 to 30, and to encourage them to rally to the Colours with stirring stories of the glory to be had in the service of the King!

The presentation, which is supported by various props, is suitable for both an indoor or outdoor location and would particularly compliment WW1 period street market or Fair.